An Introduction to the Art of Norman Daly (1961) 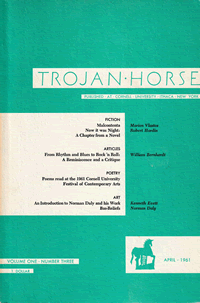 This newly digitized review with photos, first published in the April 1961 issue of the Trojan Horse magazine at Cornell University, reveals many early clues to further development into the vast Civilization of Llhuros installation.

We’re delighted to report that Norman Daly’s renowned Civilization of Llhuros has been included in a new publication written and researched by Antoinette LaFarge, herself a “fictive-art” practitioner. The book presents a heavily illustrated survey of artist hoaxes, including impersonations, fabula, cryptoscience, and forgeries. 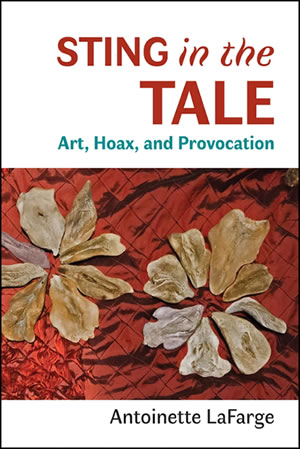 Stealthily occupying the remote corners of history, literature, and art are curious fabrications that straddle the lines between fact, fiction, and wild imagination — non-existent people and poets, Edgar Allan Poe’s hot-air-balloon to the Moon hoax, crypto-scientific objects like fake skeletons, psycho-geography, faked inventions, and staged anthropological evidence. From the intriguing Cottingley fairy photographs, “captured” in 1917 by teenage sisters, to the Museum of Jurassic Technology and the Codex Seraphinianus, an encyclopedia of an imaginary world, “fictive art” (the author’s term) continues to reframe assumptions made by its contemporaneous culture.

The shift from the early information age to our “infocalypse” era of rampant misinformation has made this genre of art with a sting in its tale an especially radical form. Cataloging historical projects and those from the late 20th and early 21st century that probe this confusion, LaFarge foregrounds the medium’s potential for run-away creativity. At its center, fictive art is secured as fact by creating series of evidentiary objects and by employing the language and display methods of history and science. Using documentary photographs and videos, created historical artifacts and relics, explanatory texts and didactics, lectures, events, and expert opinions in technical language, artists have created constellations of manufactured evidence attesting to their artwork’s central narrative. This dissimulation is temporary in most cases, often surprisingly revealed in a self-outing moment; other times, it is found out. With all the attendant consequences of mistrust, outrage, and rejection, what we can learn from fictive art practitioners both past and present bears on the fragile trust that builds societies, and that when broken, brings them to the brink of chaos.

Readers of A Sting in the Tale will be amused, delighted, and soberly engaged in thinking about what the role of art could be in shaping discord or discourse.

Antoinette LaFarge is an internationally recognized new media artist and founder of the pioneering Internet performance troupe the Plaintext Players who holds a special interest in speculative fiction, feminist techne, and alternative histories. Her artwork has taken form as new media performance, computer-programmed installations, public exhibitions and interventions, digital prints, and artist’s books. Recent publications include Louise Brigham and the Early History of Sustainable Furniture Design (Palgrave Macmillan 2019) and Monkey Encyclopedia W (ICI Press 2018). She is a longtime contributor to Wikipedia and is currently Professor of Digital Media in the Art Department at University of California, Irvine.

This title was released on August 24 and is now available for purchase.